See it in your room

Get your samples for free

How Many Trees Are There In The World?

According to research by nature.com in 2015, there are 3,040 trillion trees in the world. Read on to see tree population by continent as well as growth or rate of deforestation by continent. 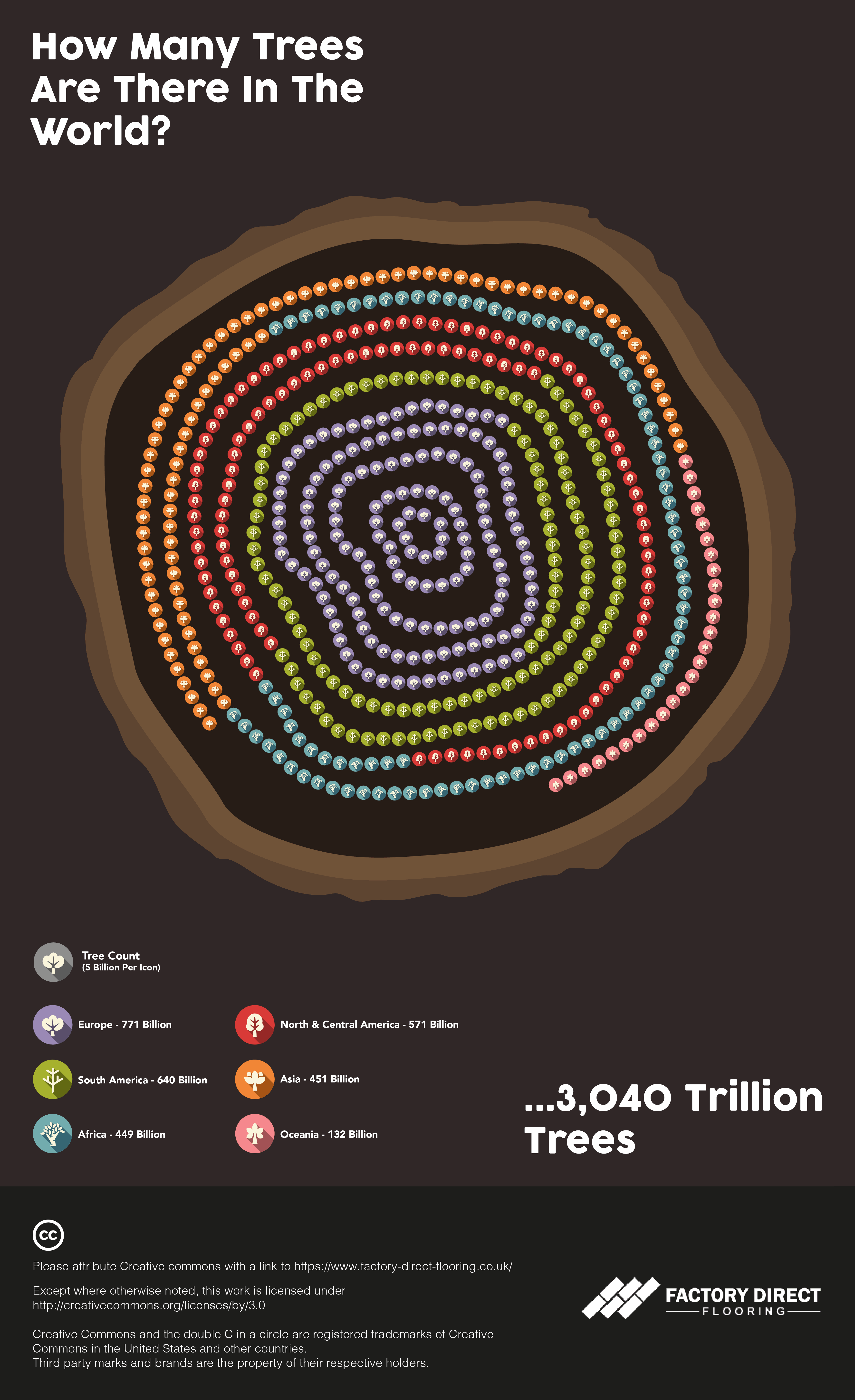 Biggest Increase/Decrease In Tree Population From 2005 - 2015, By Continent

Read on for the story...

Have you ever walked through the woods or along a leafily-veiled street, passed a tree, and wondered ‘how many trees are there in the world?’.

Maybe you watched Planet Earth II, learned that forests cover 31% of our planet, and wondered if deforestation has gotten worse than it was years ago.

Forests are a vital part of our ecosystem, producing essential oxygen and providing homes for people and wildlife. In fact, many of the world’s endangered animals live in forests, and 1.6 billion people rely on the benefits these woodlands offer such as food, freshwater, clothing, medicine and shelter.

But our forests around the globe are under threat from deforestation, which puts all of this at risk. Deforestation comes in many forms – not just chopping down trees – including fires, agriculture, development and logging. This threatens a vast range of plant and animal species.

We’re losing 18.7 million acres of forests annually, an equivalent to 27 football fields every minute. Forests play a crucial role in climate change, helping control carbon dioxide levels by soaking up the harmful gas, instead of allowing it to ruin the atmosphere. Due to deforestation, the positive effect of trees has diminished, with estimates stating that 15% of greenhouse emissions come from deforestation itself.

Factory Direct Flooring Ltd (FDF) has researched the number of trees around the globe as well as the rate of deforestation, from a number of sources, breaking it down by continent. Across two infographics, you can see just how many of these environmental warriors there are and the human impact on them since 2005.

In total, there are 3,040 trillion trees around the globe with Europe having the greatest number among Earth’s continents while Oceania has the least, owing to climate and landmass. The latter, which includes countries such as Australia, New Zealand and the Pacific Islands, has a total of 132 billion compared to Europe’s 771 billion.

In the second infographic, FDF has investigated the rate of deforestation across the planet and its six mass inhabited continents since 2005. Across a decade, four continents have recorded an increase in deforestation. North and Central America saw a decrease in tree population of 45 million hectares, more than double that of Asia, which recorded 21 million hectares of lost woodland.

Despite its notoriety for deforestation, South America recorded the lowest increase in loss of tree population, with 11 million hectares. The loss of tropical rainforests is of great concern because of the biodiversity they are home to. According to WWF, 17% of the Amazon forest has been lost over the past 50 years, much of it converted for cattle ranching.

Both Africa and Oceania have seen an increase in tree population between 2005 and 2015, with Oceania recording a growth of 32 million hectares, despite Australia’s natural resources boom. However, so long as the population grows and cities expand, demanding more space and resources, deforestation will continue.

More about the authors

Chris has been with the company over 23 years he has a wealth of experience in his roll as Flooring Surveyor. Most of his daily routing is inspecting all sorts of floors so that we can establish suitability for installation. This sort of experience is very important as nearly 98% of problems start with the subfloor.

More you will enjoy

What Is Parquet Flooring? (And Why You Need It In Your Home)

Parquet flooring is a type of wood flooring that’s made by laying many small wooden tiles in a pattern to create a regular or geometric design. Also known as mosaic flooring, the wooden tiles are made using various hardwoods and are cut into shapes such as squares, diamonds, triangles and rhombuses. The tiles can then be laid to create chevron...

What is Vinyl Flooring?

Vinyl is a fully synthetic floor made from layers of PVC and fibreglass. These materials are easy to produce, making...

What Is Laminate Flooring?

Laminate is incredibly popular type of flooring by offering the aesthetics of real wood floors...

Parquet Flooring Patterns: The Ultimate Guide For Your Home

Imagine stepping into a room and knowing instantly you’re somewhere special. Somewhere luxurious, with a striking look all of its own. Originally a luxury European flooring style dating back to 16th century France, parquet has the power to transform how you, your family and your guests experience a room. Available in a variety of traditional or contemporary materials – allow...